A workhorse throughout his entire life, from the family farm to the factory floor, Chuck Grassley is hard-wired to make things work. Whether rigging lawn mowers together to save time and money or grilling federal agencies about wasteful spending and mismanagement, Senator Grassley works tirelessly to fix what’s broken.

And he won’t stop until the job gets done right.

First elected to the U.S. Senate in 1980, Grassley since then has visited each of Iowa’s 99 counties at least once every year. He makes it a priority to engage with people from all walks of life to strengthen the process of representative government. Keeping in touch with Iowans is Senator Grassley’s touchstone for good government.
Iowans have come to know that their senior U.S. Senator is accessible, conscientious, honest, hardworking, and always on-the-job. Iowa taxpayers appreciate Senator Grassley’s tight-fisted grip of the federal purse strings.
He works to put the lid on federal spending, restore limited government and make government work for the people, not the other way around.

Chuck Grassley has cultivated broad public policy expertise and earned key leadership assignments. Policymaking from these influential committees can make a difference in the everyday lives of Iowans.

In January, Senator Grassley was tapped to serve as Ranking Member of the powerful Senate Judiciary Committee. A farmer from Iowa, Senator Grassley was the first non-lawyer to lead this big-league committee. The Judiciary Committee has legislative and oversight jurisdiction of the criminal justice system, the FBI, and Department of Justice, and handles antitrust, judicial nominations, intellectual property and immigration policy.

Here’s a snapshot of Senator Grassley’s recent achievements for the people of Iowa. As then-chairman of the Senate Finance Committee in 2020, he led efforts to deliver pandemic relief assistance to Iowa households, small businesses, hospitals and farms with passage of five COVID-relief bills. He helped secure a better trade agreement with Canada and Mexico, bipartisan criminal justice reform, tax cuts and incentives for retirement savings. He delivers tireless advocacy for renewable homegrown energy, including ethanol, biodiesel, wind and solar. A champion for rural health care, Senator Grassley secured the designation for the Rural Emergency Hospital program to keep health care close to home, expanded access to telehealth by cutting red tape, beefed up competition in the pharmaceutical industry, led confirmations of Justices Kavanaugh and Gorsuch and continues to ride herd on the Department of Justice for antitrust enforcement and oversight of the FBI, including its failure to properly investigate the abuses by Dr. Larry Nassar. A taxpayer watchdog, the Grassley whistleblower amendments have recovered more than $62 billion to the federal treasury, and counting.

With the White House and Congress controlled by Democratic leadership marching in lockstep towards a radical Left wing agenda, Chuck Grassley is holding the line on their reckless tax-and-spending spree that would restructure the economy and redefine the American Dream by expanding government control over our lives and livelihoods. Democrats’ desire for top-down government would infringe on our blessings of freedom and liberty, explode the national debt and take bigger and bigger slices of taxpayer savings, thrift and investment.

Looking ahead, Senator Grassley is working on bipartisan reforms to help cattle farmers get a fair shake in the livestock markets, cut prescription drug prices and hold the line on inflationary spending. He’s working to uphold our nation’s sovereignty and strengthen border security. Senator Grassley will work with anyone when it’s good for Iowa, including investment in real infrastructure to help build roads, bridges and broadband that will strengthen Iowa’s economy and prosperity for generations to come. 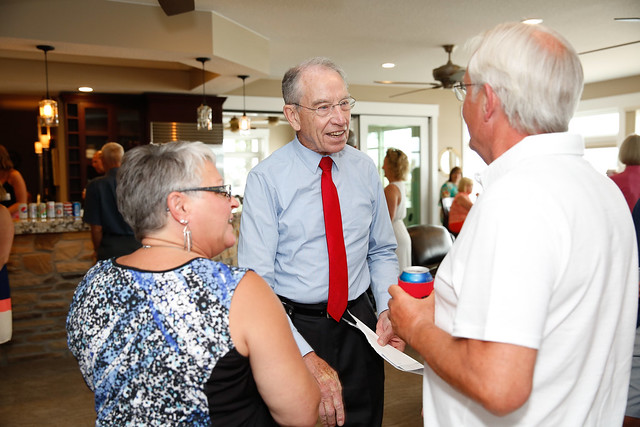